Jackson’s Dairies was established in 1950’s by Margaret and Alfred Jackson and has seen a continued success throughout the decades since and remains a family run business.

2007 saw a tough time in the milk industry, when supplies became limited. The company responded by seeking their own supplies, buying a tanker and negotiating with farmers in the Peak District and surrounding areas.

This puts them in the enviable position of having their own dedicated LOCAL supply of milk, which means they can provide an auditable trail from source, to bottle, to customer.

Now delivering some 500,000 bottles of milk each month, Jackson’s Dairies supply to homes and businesses, as well as bottle milk buyers. Their patch covers the whole of the North West.

And the future continues to look bright as it embraces environmental concerns, as well as consumer awareness of product source and treatment.

A new dairy is being built to increase production and they also have their own laboratory and testing facilities to ensure the highest of standards, every time.

More significantly, they are reinforcing their commitment to decrease the amount of waste sent to landfill; each glass milk bottle depicts the circle of recycling. They also use PET (PolyEthylene Terephthalate), a strong, lightweight form of clear polyester. Not only is it 100% recyclable, but also extremely light, so uses less fuel during transport.

Jackson’s Dairies is a member of the Road Haulage Association 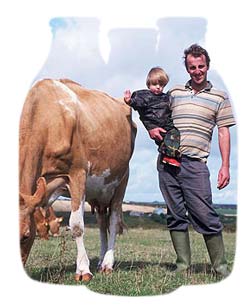